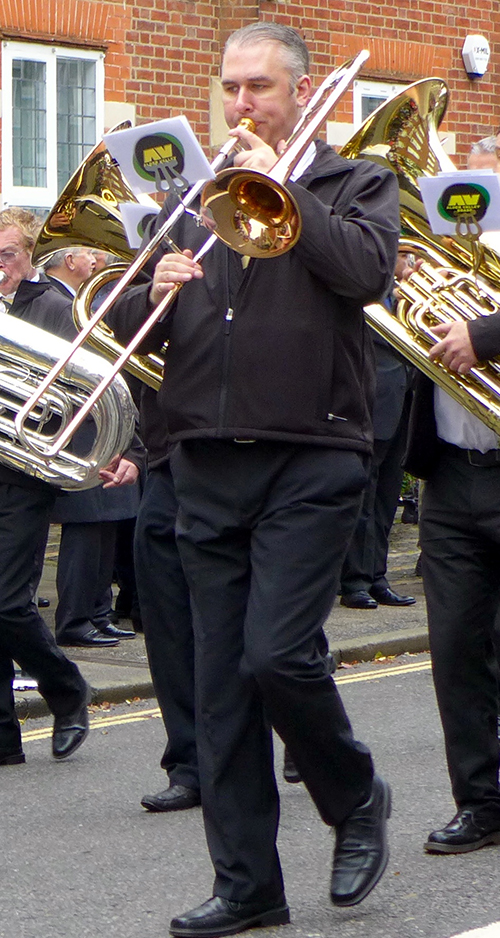 The outgoing Trustees reports had been circulated, and the new Trustees were nominated and voted for.

Roger Burke announced the winner of the 2014 Musician of the year prize which went to Chris Urwin, first trombone player. Chris commented: I feel very honoured to be chosen for this award, and privileged to play alongside such a talented group of musicians at Alder Valley.

As a relative newcomer, I would like to thank everyone associated with the band for their friendship and for making me feel so welcome since joining. Particular thanks must go to our musical director Roger Burke, and also to fellow trombonists Chris and Ivan for their support and patience as I've tried to get to grips with the demands of first trombone. I'm proud to be part of such a fantastic band, and very much looking forward to the fun times and musical challenges which lie ahead.

The Band voted for the Band Person of the Year, and this went to Bob Gates for his tireless work during the year as Chairman.

In February Alder Valley Brass welcomed 3 new band members who had recently joined the band. Judith May on Baritone, Claire Wade on Cornet and also Chris Urwin (Trombone) who joined during 2014. The Principal Cornet seat was now filled by Steve Burgess and Matthew Ruel moved to Soprano Cornet.

Alder Valley Brass competed at the Oxford and District Brass Band Association Winter Contest, on Sunday 1 March at Marlborough School, Woodstock. The Association was formed by a group of Musicians in 1923 in Bletchington, north of Oxford. Their aim now is to run three contests a year. Alder Valley Brass will play a March and a Test Piece of their own choice.